The round-robin series in Leinster began with a bang last year; a similar level of entertainment this Sunday would set the ball rolling nicely for what promises to be a pulsating summer of Senior Hurling Championship action.

Westmeath sent shockwaves around the country with a double-scores trouncing of Offaly in their opening game of the 2016 campaign. Meanwhile, Kerry created history with a victory over Carlow in their first ever Leinster SHC appearance.

Joining Westmeath and Kerry this time round are Meath, thanks to their sensational Christy Ring Cup triumph last summer, and Laois, who went straight through to the quarter-finals in 2016.

With two slots in the last eight up for grabs, where games against either Wexford or Offaly await, a positive start is crucial to build momentum in the coming weeks. 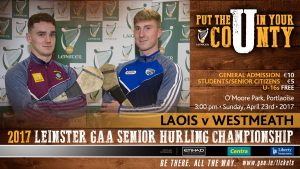 Laois and Westmeath have enjoyed some fantastic results in the round-robin series in recent years and will be optimistic of progressing to the quarter-finals again this season.

Westmeath won two of their three games in 2015 and finished with a 100% record in 2016, while three wins out of four in 2014 and two victories from three outings in 2015 sent Laois through to the quarter-finals on both occasions.

The O’Moore County men 0also enter the championship fresh from a nerve-wrecking defeat of Kerry in the Allianz League Division 1B relegation play-off, which they edged after extra-time despite being reduced to 14 men in the fourth minute.

Westmeath, meanwhile, were left to rue opening round defeats to Carlow and Kildare which ruined their chances of promotion from Division 2A. Nevertheless, victories in their three most recent league games restored morale in their camp.

And both managers know what is required to succeed during a hectic month of championship action. Michael Ryan is enjoying his third year at the helm in Westmeath, while Eamonn Kelly moved to Laois after just one season with Offaly.

Westmeath stalwart Aonghus Clarke is hopeful that they will again be capable of ending in the top two. “Laois would be perceived to be the best team in it, but the four teams are around the same level. We had Offaly first last year, which would have been perceived as the most difficult game (but) which we won the handiest, so it really depends on what team hits form when it comes to it,” he said.

Similar sentiments have been expressed by Laois captain, Ross King. “There’s four teams probably all saying the same thing – that we can all take each other on any given weekend. It’s going to be interesting,” he said. “We’ve had some ding-dong battles with Westmeath in the last few years, we know each other inside-out. Meath have just come in fresh; a new, hungry team who had a great Christy Ring campaign last year. Kerry then is our last game, we just barely got over them in the league play-off.” 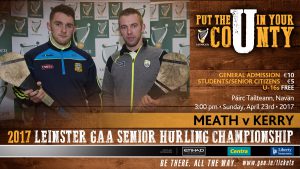 A first-ever Leinster Senior Hurling Championship meeting between Meath and Kerry should draw a big crowd to Pairc Tailteann on Sunday.

Meath return to the race for the Bob O’Keeffe Cup for the first time since 2004 and the guarantee of at least three games should assist the development of hurling in the county.

The Royal County followed up on their Christy Ring Cup success in 2016 with another title earlier this month. After five wins out of five in Division 2B of the Allianz League, they defeated Wicklow in the final by 4-24 to 2-15.

“Within our own county, football is the main sport, but Meath hurling is on a bit of a crest of a wave at the moment, and we need to keep that going,” said defender Sean Geraghty. “On paper, the three teams would be ranked slightly ahead of us, and we are the outsiders. But we feel we are where we belong. We feel we are well fit to go up and play these teams.”

Kerry were perhaps disappointed not to build on their opening round defeat of Carlow last season. After hurling impressively in the first half of their next outing versus Westmeath, they lost by five points and paid the price for conceding three goals against Offaly in the third round.

Despite beating Laois in their Division 1B encounter this season, they didn’t pick up any more points and ended up losing a relegation play-off to Laois at O’Moore Park.

But captain and goalkeeper Aidan McCabe said they are now fully focused on the challenges that lay in store. “We’re away for the first two games. Meath can’t be bad after winning their division in the league. We’ll give every team the same amount of respect.”

“I suppose to progress as far as we can go is the main aim – after playing in the round-robin last year, we have that bit of experience, we’re not going in totally blind. Nine times out of ten, we’ve been underdogs, so when that’s the case you’ve nothing to lose, you just give it your best and hopefully it all works out.”