GAA Clubs in Leinster who are enhancing their role in local communities by promoting health and well-being initiatives showcased their work at Croke Park on Saturday, 11th March.

Examples of the wide-ranging projects being undertaken were highlighted in front of a packed attendance at the GAA Healthy Clubs Leinster Roadshow.

Many of the club officers who attended from across the province have already expressed an interest in signing up for the GAA Healthy Clubs project when it is expanded further in 2018.

Currently, the Healthy Club project is into its second phase which involves 60 clubs, including at least one in each county. The ultimate aim is to involve every GAA Club in the country, thus improving the long-term health of every community in the 32 counties and ensuring a brighter future for everyone.

The Roadshow emphasised how clubs who participate in the Healthy Clubs initiative quickly attract new volunteers who may not have been involved with the GAA previously.

Four clubs from Leinster detailed the progress they are making, some of whom have already earmarked their grounds as ‘smoke free’ zones and invited people in their area to utilise walking tracks and gyms.

Clara GAA Club from Kilkenny, for example, have made huge strides with the promotion of healthy eating, which was detailed by their representatives, Caroline Clifford and Carmel Brennan. Cork legend Anna Geary joined with them to provide a healthy eating food demonstration.

The Healthy Clubs project is backed by Irish Life and Healthy Ireland. As part of its Corporate Social Responsibility programme, Irish Life has committed €1 million to the scheme over an initial three year period. 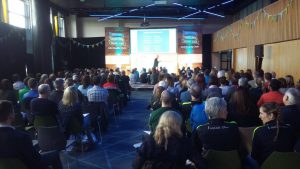