This Saturday promises to be as exciting as it gets in the Leinster Hurling Championship. While exciting it can also be a bit complicated. We take a look at some of the permutations ahead of .

All 4 teams in action have a theoretical chance of reaching the show piece, while equally all have a good chance of going out. The various outcomes of both games and the effect this will have on the championship are laid out below. Strap yourselves in for what is sure to be an exhilarating evening of action!

Result – Dublin Win = Dublin have the most straight forward scenario of the 4 teams, anything less than a win and it is the end of the road for Mattie Kenny’s side. A win for the capital side would also leave the Tribesmen sweating on the result in Wexford. A draw in the sunny south east and Galway are out.

Result – Galway Win = A win for Galway, see’s them guaranteed a place in the Leinster showpiece. They will face off against the winner of Wexford Kilkenny or in the event of a draw on Slaney side we will have a repeat of last years decider.

Result – Draw = A draw will still be enough to see Galway reach the Final. However, it then gets very complicated for Dublin. Their Champiosnhip survival would be reliant on a Wexford win of 9 points or more, or a Kilkenny win of 12 points or more. Anything less and it’s the end of the line.  Galway would then be joined by the winner at Innovate Wexford Park or in the case of a Draw Kilkenny.

Result – Wexford Win = A win for the Slaney side and they are through to the Leinster Final. For Kilkenny, anything bar a Dublin win will see them grab the 3rd spot and qualify.

Result – Kilkenny Win = Similar to the above a win for the Cats would see them once again reach a Leinster Final. Also like the above anything except a win for Dublin in Parnell Park would see Davy Fitzgeralds men end up in 3rd place.

Result – Draw = A draw here and we are deep into permutation territory. This result brings the action in Parnell Park into sharp focus. A Dublin win and it’s a Kilkenny Wexford Final with Dublin grabbing the now coveted 3rd spot. A draw in Dublin and it will be a Kilkenny Galway Final with the Model County in 3rd. A win for the men from the West and we are back in 2018 again with Kilkenny taking on Galway, while Wexford again occupy 3rd place. 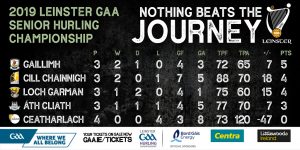