On Sunday Comhairle Laighean welcomed its Wheelchair Hurlers to Croke Park. It was a special occasion for all players as it was a  celebration of the many personal and team achievements over the last few years. With many of them in possession of All Star, All Ireland and League medals. While some had also represented Ireland in a Floorball Tournament on the International stage in Breda, Netherlands.

We are lucky to have had some exemplary players representing the Province giving excellent entertainment and showing great sportsmanship. Though at times it has been a challenge to field a team with a limited panel primarily due to the two years lost as a result of the pandemic. However, the team has bounced back this year following a major effort to reconnect with players. It is to the credit of to each and every one of these players that Leinster performed so well during the year. The displays throughout epitomised inclusion, diversity, determination, bravery and teamwork.

A special thanks to Leinster “Games for All” Cathaoirleach, Pat Lynagh and Runaí Brian Carberry for not only planning and organising this heartfelt celebration but their work over the last three years. 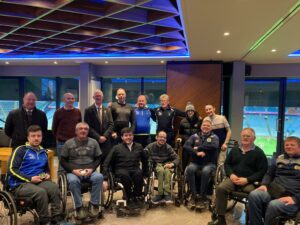 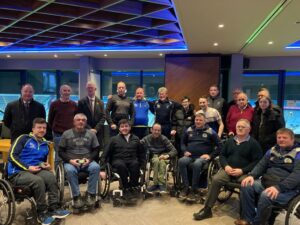